Xyx lands awkwardly with a soft thud, and a sniffle.
Looking around her with blurry eyes, she can make out that wherever she is, it's not very well lit.
She is in a corner of a room. There is a dusty patterned rug on an old wooden floor.
There are shelves and other furnishings nearby, but most importantly, it is quiet in here.
Many things rattle around her head, making it ache, but it all seems so distant behind the overwhelming tiredness. Crawling further into the corner, and under the nearest item of furniture, she curls into a ball, rocking slightly. It isn't long until she is fast asleep.

Hans searches through the guild house thoroughly, softly calling the midget's name. Starting at the kitchens, he works his way upwards.

[OOC: Totally just given Wise-One a name in ND]

In a poorly lit room a series of candles surround a circle, within the circle is a pentagram with each constructing line in a different colour, marked out to unrivalled accuracy. The candles seem unnaturally subdued and only shed a minimal amount of light, the books that line the walls barely visible.

From the outside of the circle a lectern is placed, a large tome opened as characters dance and glow on the page, the book responding only to the resonance of the mind.

Ideas begin to move, concepts from the air learn to speak and whisper in the incantations as invisible forms are made in the circle.

Voices made themselves more pronounced, louder, more recognisable, though even with this, they were struggling over each other, no unity to the voices, just a motley assortment of cries, screams and shouts from a pulsating form of idea and consciousness that existed within the mind's eye.

The lights flared up, as if all the subdued light from before were suddenly released in one great burst, illuminating the entire room of what appeared to be a library, though each book was easily three to five times the thickness of what was considered typical, the room was filled with these massive tomes, not one of them with markings on the spine to indicate their purpose or even if they were in the right place.

The voices became less split, there was some consensus in what was carried around the room, but it was sporadic and the few words that were unified were useless to him, it was clear that he wasn't quite ready for this, and his mind wasn't quite set after concern for what happened recently, this was mostly to pass time for him with a bit of practise with his skills.

the voices died down and the candles dimmed to a normal light as Divah closed the book and set it in the one open shelf space of the section he was in. Traces of whispers still resonated throughout the floor as he did so, and even after he had cleared away all he set out, there was still a sort of "white noise" in the air, a kind of silence that was so stark it could be felt by anyone who lurked in the world that Divah had seemingly shut himself in. Still Xenos; Still Tion, in fact. But this was a place that no-one ever came, because so few people knew how. 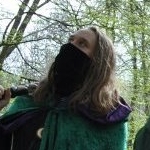 While she sleeps, Xyx dreams. She moves through the landscape, blurs of purple and orange, swirls of blue and pink, as though looking for something. Everything seems much larger than her, though nothing much has form to speak of. After a while, things start to grow out of the colours- trees, doors, people.
Faces both familiar and strange to her.
There are voices, but none of them are clear. They talk over one another, but in whispers.
She cannot make out the words.

The colours turn to green and gold.
Green makes her feel safer- but gold makes her nervous, for reasons she cannot pin down.
Looking down at the crazed floor, she takes care to step only on the emerald tones.
Abruptly, she walks into something- firm and clothed.
As she steps back to see, it is a figure.

The person carries guns in their belt, and there is a large butterfly on their shoulder.
It is hard to make out if the face is male or female, but it feels like a friend.
A mane of wild windswept curls hang around their shoulders, glittering blonde, and pointed elven ears peek from beneath it. They reach out, offering a cake, with a gloved left hand.

She makes to take the offered friendship, but finds that she cannot move.
Suddenly there are strangers nearby, behind the figure, sharp angled warriors.
She tries to warn the blonde haired stranger, but no sound comes out.
The shining ones shout, and in a blaze of light, everything vanishes.

The child hidden in the corner of the lost room lies huddled beneath a black coat.
A small lick of dull blue flame slinks slowly across the crumpled form, burning like Lanetian brandy on a midwinter pudding. She whimpers softly, a single note, but does not yet wake.

After a while, shapes begin to form in the blackness.
White walls, tinted grey-blue in the dark, are approaching- or is she moving toward them?

Before this question can be answered Xyx stands among them, towering over her, slick and smooth, like polished marble, yet warm to the touch. The sky is lightening, as if by a coming dawn.
The walls are so tall.

Finding the strength to move again, she does so, jogging at first, but breaking into a run.
Just when it seems the corridor goes on forever, there is an end. But wait, it is a corner.

She spends what feels like an age, running the maze, unsure if any progress has been made.
The walls all look the same, unclimbable, only the relentless change of the slowly growing light, as grey fades to blue, which grows to lilac and towards pink...
About to lose hope of ever escaping, there is a sudden sound from above- an eagle's cry.

Squinting against the brightening sky, a faint shape can be seen- a ghostly bird floats high on a non-existent wind. Pink turns to orange. The screech sounds again, and it banks to the right.
There seems to be a way through the maze...

Somewhere in a dimly lit room, a shuffling noise occurs.
Though, as with the proverbial a tree falling in a forest, there is no-one there to hear it.
A small figure, cloaked mostly in black, steps slowly at first, as though waking from a dream, but begins to gain speed.
Soon the child is running- down a hallway and around various obstacles, erratically changing direction every so often.

If someone was only watching, they could see that the girl was following, perhaps even chasing something-
But there is nothing ahead of her.
As she passes a patch of light on her journey, the observer could note that behind the face's mask, the eyes were closed.

Running blindly down the corridors, Xyx seems completely unaware of her surroundings, yet somehow doesn't hit any walls or obstacles. Or rather hadn't, until someone steps out of a nearby door.

[OOC: First come first served. This could be anyone, and anywhere within reason, as she's been going for a while.]

Johann and Lydia step into the doorway. Both of them express signs of surprise and confusion upon seeing the little celestial. Johann walks over to her, and kneels down to her level, rather bemused.
Lydia raises an eyebrow, before exclaiming;

As the Amranians stop her on her path, she cries out- or at least, she looked as if she had, but when her lips parted a deep man's voice burst forth.
"KCAT TA! Ecna ts ixe ruoy ref fus ton llahs we! Noitan imoba na era uoy!" came the shout.

Xyx opens her eyes sleepily, and looks up.
"Johan!" she grins, and hugs him. "Hello Lydia too." she says with a yawny smile, and swaps to hug the Lady.

Lydia picks up the small child, hugging the body to her own.

"Do you want to stay in our room, tonight, Xyx? It is rather late, both Johann and I were off to bed soon anyway. We can get another bed put into it, just for you."

She smiles to the girl in her arms, rocking her side to side as she sways.

"Hmm. What's in it? Oh you mean for sleeping? I just had a sleep...and a funny dream. I think you were in it...but I'm not sure."
She chatters away brightly, twining her hair in her fingers as she does so.

"I take it we're either staying up with her together, doing shifts, or trying to get her to sleep...or better yet, you could stay up all night with her, get some practise in for when you're a father."

Winking to him before looking back to Xyx, she asks

"What was the dream about?"

The child frowns in concentration, trying to remember.
"I don't know. I think a bad thing happened, and I got lost..." she says, with concern weighing on her eyes. "But then I woke up and I found you." she finishes, and looks across with a smirk. "Are you having a baby, Johan?"

Looking to Johann, Lydia blushes and then bursts into uncontrollable laughter

"I do hope he's not the one pregnant"

She looks to him, smirking slightly.

Xyx giggles, though she's not sure what the joke is.
Opening her eyes again, she notices something.
"Oh! A butterfly!" she exclaims, pointing down the hallway.
By the time you've turned to look, she's already there, trying to catch it, though it is quite safely out of reach.

Watching her, you aren't sure if it's because you're tired, the effect of the Celestial's presence, or simply a trick of the light, but for a moment her oversized coat appears as a rich green cloak hung over her shoulders, beneath a cascade of tumbling bright blonde curls. As you blink, the image is gone, and the demi-Xyx still can't catch the insect.

Lydia walks towards the girl slowly, picking her up equally as slowly, to the height of the insect, trying to make sure it doesn't fly away.

Staying still so Lydia might lift her, she gently she reaches out a hand. To her delight the floral looking insect lands on the tips of her fingers. It flutters there for a moment before settling and lays it's wings open flat, resting. In the patterns you see a familiar swirling shapes. The wings continue to move downward, until they curl around Xyx's fingers, and at the same time seem to melt into pure colours, becoming a tattoo, then a smudge, and then with a strange chiming noise, the butterfly is gone.
"Teehee- that tickles!" she says, fidgeting.

Lydia shakes her head, then looks to the child.

"Before I met you, I wouldn't have believed that to be possible. Now it just feels like an everyday occurrence."

Putting her down on the floor, she smiles to her. Kneeling to her height, she says

"Go and see Johann, I'm sure he can find some sweet cakes and buns for you"

"Yes Lydia." says Xyx, and rushes over to Johan.
From where you're kneeling, you're not sure, but she seems a little taller.
"Johan! Johan!" she calls excitedly, and tugs gently at his cloak. "Lydia said we should get some cakes, but I'm not hungry, can we go catch some more butterflies? Pleeeease?"

Johann grins.
"Why not? I wouldn't have thought there would be many about here, but you seem to find them easily enough."

"Take care of her, I'll riffle around for some nibbles"

She walks towards a cupboard, before turning to Xyx and smiling,

"Off you both pop then"