Newhearth, of The House of Draugr.

The two men step out of the rain and remove their cloaks and hoods.


Under their cloaks, covering arming jackets, the two men wear thick tunics of a deep blue, each emblazoned with a grey sword on the breast. They wear wide leather belts, holding up hide trousers, and below them, thick fur boots, bound with leather.

Apart from their clothing, the two men bore little resemblance besides their dark hair. The first, being of great height, and broad, wears a thick, but neatly brushed beard, which comes down to the top of the sword on his tunic. His features are large, his nose slightly reddened by the cold, with a large brow that sports deep wrinkles and an old scar. At his back is a mean looking, but clearly well looked-after greataxe.
The other man is a little younger, in his mid-twenties at a guess, and is of significantly slighter build, his eyes are lively, and glint as they dart about the room. He has no facial hair but a little stubble, and has a sly but friendly grin on his angular face. He wears two small sheaths at his belt, made for shortswords, whose otherwise simple hilts can be seen to have small black gems inlaid into them.

The tall man, Gjurd, steps forward to meet Lydia an a warm, but slightly crushing embrace.

"Lady Lydia! It's good to be here!" He speaks with a loud, rumbling voice and thick Volkrime accent.

He looks up, still holding her.

"And Johann, or SER Johann should I call you? Hauldr?"

"Gjurd...Gjurd...you're...crushing me!" She exclaims, unable to properly breathe.

"Lydia, Johann. It's nice to see both of you again."

Johann stands and walks into the entrance room to greet them.

"Lars! Gjurd! Old friends, come have a drink and warm yourselves by the hearth!"

Seamus rises from his seat, puts down his mug of mead, walks over to the new arrivals and offers a handshake to the larger of the two.
"Captain Seamus O'Malley, pleased to meet you Ser. Any friend of Johann's is a friend of mine!"

Lydia shakes herself lightly, taking a deep breath. "It's fine, Gjurd, you just don't know your own strength. And Lars, it's good to see you again. How have both of you been?"

Hans raises his mug in salute to the newcomers, before taking a swig and introducing himself

"Hans Yksin, First Mate aboard the Rescue. Anyone Johann deems a drinking buddy is fine by me."

He smiles and refills his mug

The two men shake the Captains hand in turn.

"Not too bad thanks, It's been a shame not having Johann here these last couple of years, but we get our meat, our mead, and our songs. We get by."
Lars smiles and goes towards the fire in the living room to get warm.

"Aye we 'been doing alright, but YOU! All of you must have some stories worthy of song to tell!"
Gjurd gives Johann the bear hug, and then goes straight for the mead.

"AH! a fellow Nordman! Another sailor by the look of you!"

Gjurd takes a tankard and clunks it against Hans.

"I don't think we've seen each other since just after Johann and I got 'together', Lars. What heroic stories have you go to tell us all? You must have some" Lydia smiles to him, passing him a glass of mead.

Hans grins and swigs, clunking the tankard back together afterword.

[End of episode 1, because I'm tired

[Also - NO GOLF. for multiple reasons.]

After greeting the others, the two new guests take their seats in the living room, and begin to drink from the mead cups; Gjurn gulps down mug after mug with admirable determination and speed, while Lars is more relaxed, sipping it as he warms himself, his back to the fire.

After a few moments of quiet, Gjurn suddenly booms out again.

"So! There's been a lot of fuss recently, concerning the Jarl and the Royal family. Not heard too much I'm afraid. I was told YOU lot had something to do with it."

He laughs into his mug as he takes another sip.

"Yes, well, it was mainly Johann here, but I helped to some degree. To be honest, I didn't care much what happened, only hoping that at least one of the parties involved would pay me. As it turned out, one forced payment out of me and the other knighted the Hauldr..."
Seamus takes another sip of his mead, and continues.
"Of course, if it wasn't for a Dwarven colleage of ours, we would have been short on funds after said payment, but he had earned a couple of warrants previously and generously offered to partially pay for me."
He looks to Johann, anticipating a reaction.

The conversation goes on for some time telling stories of adventures, as does the drinking. Mead isn't renowned for it's high alcohol content, and so even after a while, the guests are still more or less sober.

Johann seems to agree. "Ah yes, it seems I haven't had a chance to really hear you speak of yourself so far. Pray tell"

"The first part is a tad dark, gentlemen. My mother, a sudman and suspected Necromancer fled north after the Duke of her area baselessly sent men to capture her. As you know, Necromancy is heavily frowned upon. My mother was a healer, so good she could bring people back from the brink of death. But, the doctors and men of the area would not acknowledge her capabilites, choosing to believe she was just letting her patients die and reanimating them than allow the idea of a woman more skilled than them. They gave false evidence that she was a Necro, and she ran, warned by her servant cousin in the Duke's estate that they were coming."

He looks at his boots, face sad and the mead swilling as he gazes at the floor without really seeing it."

"She fled north, met my dad, a Nordman. Fell in love, got married, had me... Three years after I was born they found her, dragged her back south. My dad rallied some of the old lawmen he knew from serving in the Royal Inquisitors and came after her, I was brought along. We didn't make it in time. We burst into the courtyard as the Headsman's axe came down. The only memory I have of her face is the one where her head lies in a bucket."

He downs half his tankard and refills before continuing.

"Dad knew a few tricks from when he was an Inquisitor. Knew how to get evidence from places he wasn't really supposed to be allowed in. Taught me everything he knew so that If someone ever came after me, I could give them the slip. He sent me off to the school soon after. I moved onto the Engineer's Guild as an apprentice afterward, became proficient with firearms, they always wanted me to test their newest weapons. Dad died halfway through my education, and I had to find a way to keep going like he wanted me to. Had to steal to survive. Not glorious, but it got me through my Engineer's Decree. Followed my dad into the Inquisitors soon after. Used my contacts as a thief to bring many a less than stellar citizen down. Murderers, insurrectionalists, those that dealt in the physical aspect of crime. Dad said that those who were stupid enough to get caught deserved to be punished, especially those who harmed their marks when comitting the crime. He taught me to be a wraith, unnoticed. On minute your stuff would be there, the next, gone. I NEVER went for the poor or the elderly and I certainly never physically attacked them. Years went by and it got boring. Then one last job, personally requested by the Princess. Take out that rebellion-starting Jarl. He was associated with the son of a bitch that killed my mother, so I was in. Turned out he'd died before I got there. Damn shame. After that little thing at prospero, the Captain offered me my place on the ship, and I accepted. I missed the thrill of the thief. Started smuggling stuff out of Shuru that was only made illegal out of Xenophilic fear. and here I am, friends with a Knight, Serving on the only known Airship in Xenos and commanding a small section of the Merc Guild. Anything else, gentlemen?"

He looks up, forcing a smile after recalling his mother.

The room is silent.

"Another drink? Or is there food ready..?"

"I could use another drink, that's for damn sure."

He fills his tankard to the brim with McCorkindale and swigs at is, starting out the window at the storm that threatends the area, seemingly unaware of other goings on.

Seamus, after having been quiet for most of this conversation, decides to speak.
"So, we've heard Hans's story, now for Johann's. Gjurn, Lars, any tales of importance from your time serving with him in the Guard?"
He looks inquisitively at the two Nordemen, taking a slow swig from his mug.

Gjurd and Lars look at each other for a moment before laughing nodding.

"Oh there's many to tell, but I think it's best the man himself tells the one we're thinking of."

"Ahah, yes, the one about that night with those nasty things on the wall?"

[TimeJump - We are now in the dining room, eating dinner at the large long-table, eating roast hog, cooked by the incomparable Dwarven Chef, Glenn.]

Johann rolls his eyes and sighs jokingly, clearly this is not the first time he has had to tell this story to Gjurd and Lars.

Edward knocks on the door loudly, hoping to be heard above the storm raging outside. He's a tad wet and shivering somewhat, but seems happy nonetheless. He crosses his arms in front of him and hides his hands up his sleeves. 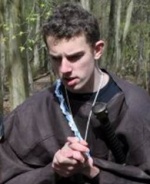 Hearing the knocking, Hans gets up.

"I'll check it out. Hosts shouldn't be doing all the work. A little late to be showing up..."

Moving through the house quietly, he throws open the door, pistol aimed at the newcomer. Seeing the father, he lowers it somewhat, but also looks past him into the night as if looking for someone else.

He moves aside, holding the door open for the Priest.

Yes, it's me... hello to you to... It's nice to see that people still believe in friendly greetings.
Anyway, who's here?

Edward steps inside past Hans, brushing some of the water off of his robes